On 17th October, 2012, she received another award for the Best Performing School in the nation during the Hallmarks of Labour Foundation Young Achievers Awards 2012.

She was awarded  by The Reward Nigeria as  “Best Secondary School” in Nigeria in 2010 and 2013. Furthermore, in July 2012, she won the National Secondary School Quiz Competition as she represented Edo State.

On 26th November 2015, one of her graduated student- OFURE ENAHOLO won the Overall Best Candidate Award in 2015 NECO examination in Edo State.

She also came first and won the LAPO Science Quiz Competition Award during their 2015 annual competition organized by Lift Above Poverty Organization (LAPO). 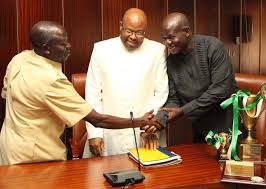 On 22nd May, 2016, She received The Best Performing School in WAEC 2014 Award from HallMarks of Labour Foundation, the second time.

On August 11th, 2016, she won the Edo Womens Development Initiative Award tagged; Award of Academic Excellence in the 2015 WAEC Examinations.

On 27th August, 2016, she was awarded for her Excellent Performance in 2015 WAEC Examination in the form of Cash/Books Donation by Culbeat Foundation under the Auspices of Reward Nigeria Award. This award she has won for the 3rd time.

tagged:
“2017 Outstanding School of the Year Award” based on her 2016 excellent performance in public exams, infrastructural facilities, among other criteria. (On Wed.14th June 2017). Lumen Christi has won ABR Award for d 2nd time.

My good people, please kindly join us (Lumen Christi Family) to return ALL Glory, Honour, Adoration, Worship, Praises & Thanksgiving to our Mighty, Holy & True Living GOD who has faithfully blessed Us with these great Awards again on 14th June 2017, by the AFRICA BRANDS REVIEW. Sincere appreciation to God & the organization. God bless them more!!!